January 2, 2002 La Saumane, Haute Provence, France
(An excerpt from my book-in-progress, Province of the Heart)


Today is really the first day of the euro, since yesterday, the day of its formal introduction to the eurozone, everything was closed.  It is marvelous to watch an entire society wrenched into the sudden confrontation with a new means of doing something they have been taking for granted their entire lives: exchanging money.

Change (pun intended) does not come easy—the oldsters around here still reckon in the former French franc, which was retired soon after World War II.  But for me, the international traveler, using a new currency brings only a blasé yawn. Francs, pesetas, euros: it’s all the same. In fact, the euro is the easiest of them all, since it is roughly equal to the dollar, at least for now. Pesetas are (oops! were) 185 to the dollar, francs about 7.4 to the dollar, so for the mathematically challenged like myself, it was always a matter of either groping for the calculator or rounding up or down with careless abandon in multiples of ten and hoping I wasn’t risking the poorhouse with my purchases. And the numbers were always a bit of a shock: 1000 (pesetas) for lunch, 100 (francs) for a pre-paid phone card. I say, bring on the euro!

And so says everybody else, these days. The euro has been enjoying a surprisingly enthusiastic reception, considering the grumbles and suspicion that anticipated it. People feared merchants would “round up” prices, causing inflation. (This did eventually occur. After six months, a politically prudent moratorium on price increases quietly expired. Real incomes were slashed and the popularity of the euro soured. And when I originally wrote this in 2002, I had no idea that ten years hence, the future of the euro would be in doubt.)

They feared that countries with less valuable currencies, such as Italy, Spain, and Greece, would have the advantage over those with stronger currencies, like Germany and Holland, since their monetary position would improve literally overnight. (Now, with Italy, Greece, and Portugal on the brink of collapse, we know what happened to that prediction!)

And finally, they feared the loss of that intangible quality, national character. The Brave New World of a united Europe threatens to roll like a Panzer over psychological borders, physical borders having splintered already long ago. It doesn’t help that the Germans, still the target of suspicion after sixty years of peace, have been the engine pulling this train from the start.

The French didn’t fear the euro as much as they professed indifference. I plucked this from a report in the New York Times:
‘We're used to not having a strong franc,’ said Dominique Borde, 60, a respected French lawyer. ‘The franc is an economic symbol and we always thought we could have a society without an economy. We never thought we should live by a balance sheet. We're proud of art, culture, intellectual life. Financial and economic matters are not what we are proud of.’
Bravo, Dominique!

January 2 dawned bright and cold and I was sans croissants, a lamentable state. So off to Mme. Pascal’s. I wondered if she would be open. I still haven’t mastered the vagaries of opening/closing hours of stores. They vary by village, indeed, by merchant. But the rule of thumb seems to be, the more I need an item right now, the more likely the store is to be closed. I cautiously pushed open the door. 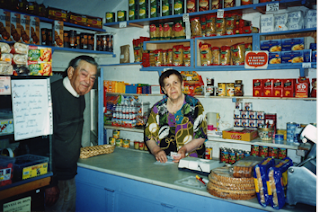 Oh-la-la! What a line! There must have been ten people backed up in the miniscule space from the counter to the door, everybody waiting patiently while Mme. Pascal and the customer she was serving struggled over the new currency.

The first thing I noticed were the two spanking new machines enthroned on the counter: the scale, which calculated price per weight in euros and francs, and the euro/franc calculator that dispensed receipts. A customer ordered two slices of deli meat. Madame Pascal sliced them with her customary deliberation and placed them on the scale. The new machines gleamed in the dim little room.

Mme. Pascal looked at the read-out in growing puzzlement. “Je suis preparé en euros!” the customer sang out proudly. “I’ve brought my euros with me!” But that didn’t help Mme. Pascal, who was still negotiating the difficult transition from francs to euros, her usual aplomb strained by the effort.

The line of customers tautened with suspense. Finally, she called for her son, a weathered looking man in his fifties who strode in with a confident air. He pointed out to his mother that since the customer already had euros, he just needed to pay the sum that was lit under the euro sign on the scale. General relief. With the relaxation of tension, the customer warned in a jocular tone as he slapped the shiny new bill on the counter, “But you know, these aren’t our euros. They’re Dutch.”
Posted by Francesca Rheannon at 5:18 AM